Home 35 Behaviors of Your Dog Explained
Skip to content

35 Behaviors of Your Dog Explained

Why do they put the tail between the legs? Or why are they running asleep, or hide their prizes, or they lick us? Learn to read the “Dog language” with our guide to translation into the human language of the different signs and behaviors of your dog

No matter how close we are with our canine companions, we are part of two different species, which means that we express in different ways what we want to communicate.

Humans communicate by words and dogs communicate in different ways. For this reason, it is very important that, as owners of our pet, we learn to interpret what our dog is “telling us”, since we have control of everything they conceive as their world.

By being able to better understand our furry companions, we can avoid frustrations and confusion. And this is very important, as scientific evidence increases that our canine companions pay close attention to our words, mood, body language and tone of voice.

The next dog-human language translator is an excerpt from Dr. N. Dodman’s book, and we hope it will be extremely useful in strengthening and improving the link with canine members of our families.

He moves away by stroking his head

It may not like the feeling. This is also a domain sign for a dog. Most dogs prefer to be caressed on the chin, on the front of the chest or on the side of the face.

Walk in circles before bedtime

His ancestors did it to flatten the grass and make a cozy nest. Your dog is reacting to his evolutionary instincts.

He barks at postmen

Yes, this also has an explanation, The postman leaves reliably every time your dog barks, so he continues to bark to exercise his authority over the situation.

Dogs growl when they are happy as well.

Dogs, especially puppies, whine when they feel cold, hunger or loneliness. To calm them down, cover them with a warm blanket, feed or pay attention to them in regular periods.

Your dog may be considering whether to follow an order you just gave him.

Dogs yawn when they are tired but often do so because it helps them dispel stress or internal conflict.

Licking their lips is a sign of nerves, anxiety or submission.

Your dog always looks for your attention or a positive reaction. In some cases, dogs lick to establish the domain.

Insists on getting on the couch

Even when you’ve told him not to, your puppy is likely to try to reach a higher place to prove mastery .

Scratching after making their needs

It marks its territory and leaves a visual signal (altered soil) and its aroma (probably from the sweat glands of its legs).

This is known as coprofagia, which is a typical and common behavior in puppies. In adult dogs, it can be for medical or behavioral causes, as well as stress.

It stirs in nasty things

If your dog is stirred in stinky things on the ground, it’s to advertise where it’s been. It could also be a rooted behavior of their wild ancestors, who wandled to hide their smell and avoid predators.

He might be trying to help yourself vomit to relieve stomach upset. Or their body may announce that it needs some extra vegetables for nutritional balance.

Your dog identifies the other scents in the area to decide where to leave their own. It might also be looking for a place that hasn’t been urinated by another dog.

Sniff the butt of other dogs

Your dog pans to regulate his body temperature, it is also possible to do so when he has anxiety.

He looks happier with dogs of the same breed

If your dog has had pleasant experiences with their siblings and dogs of the same breed, you could expect that to happen with dogs that resemble it.

Bends in a playful way

If your dog lifts its rear upward while “tilting” with his head and paws close to the ground, it’s because he feels happy and playful.

Dogs with increased predatory impulse and without any escape tend to chase their tail. In the case of some dogs, it is possible that their behavior becomes compulsive, in that case it is advisable to consult with your trusted veterinarian.

Puppies who separated from their mothers at an early age can breastfeed with soft items such as blankets or stuffed toys.

Head out of the car window

It does it because it is fun and because the air that passes is full of interesting smells. However, it is better to keep their muzzle inside the cabin, to avoid possible injury with flying objects. A good option is to place a Harness with a Seat Belt, and regulate it so that It can feel the smells without tying their head outside.

Bark at other dogs with a high head

This is a sign of dominance, especially when combined with direct eye contact, a tense body posture and an upright tail.

Barks at other dogs with his ears against his head

This is a sign of fear or submission, especially when combined with a hidden tail and restless eyes.

Quickly and furiously dig intothe land, bed or any object.

This is probably a redirected predatory instinct (think of terriers digging in search of prey nesting underground).

A dog that is at a lower level in the herd could do this to protect its food from a more dominant dog (real or imaginary).

Hide their prizes instead of eating them immediately

Follow their natural instinct to store food to make sure their have some available later if needed.

He’s dreaming, maybe running to catch a rabbit or another creature.

Move the tail fast or slow

The speed of the movement of their tail is like an energy indicator. If they are very excited, their tail will move quickly. It will move at a slower pace when they are interested but not 100% committed.

Tuck their tail between their legs

This is a sign of submission, uncertainty, anxiety or fear.

This is a sign of interest, dominance and trust.

It may lack appropriate chewable toys (made of materials you prefer). NOTE: If you chase him all over the house to get your belongings back, he’ll probably think it’s a really cool game.

Sniff people in the groin area

The nose knows it. A dog can tell a lot about a person by pheromones coming from that part of the body.

Shake toys furiously with his mouth

Your dog finds himself doing what he would have done in nature, shaking his prey by the neck.

Hedding the hairs on their back

This occurs when the fight or flight stress response is activated and releases epinephrine, causing the muscles to contract and lift to the hair.

The best way to ensure that your dog develops or maintains positive social and behavioral skills is to address training problems as they arise.

If you have doubts or other behavioral contributions, leave us in the comments your opinion and detail.

Written by Raul of Team Barki

You are on theBark in Green® blog where you will find tips for the health and happiness of your pets. 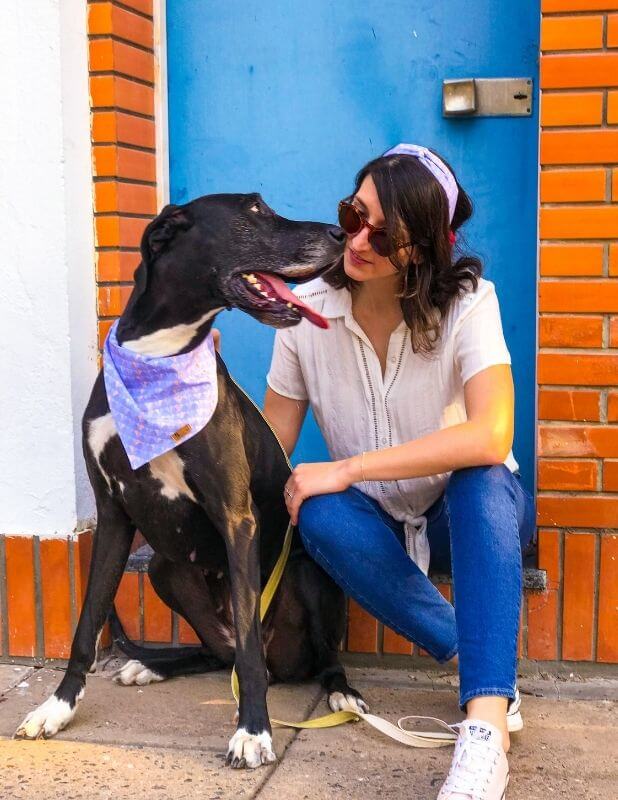